They’re back – bigger, better and harder than ever! And we here at the Booze HQ are very proud to bring you their debut full-length release from the undisputed masters of Hillbilly Punkrock ‘n’ Roll!

“All Time High” is my pick of best drinking record in this issue! The press release states; “Instead of milk in the babies bottles they got whiskey, instead of sugar on their cereal they got cocaine, instead of lullabys they got Elvis” and labels their sound as ‘Hillbilly Punkrock’n’roll’. Although the Swedes list Hank Williams (they cover “Pan America”) as an inspiration, I’d call their highly infectious sound for ‘good time drinking rock’n’roll singalong punkrock’, think The Devil Dogs with more a snotty ’77 punk style like The Adicts and you’re halfway there. 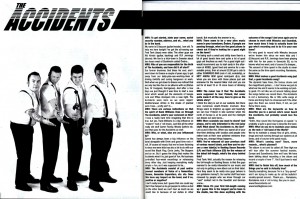 Recorded January 2004 at Soundlab Studios.. Coverart made by Jagged Design.

Recorded January 2004 at Soundlab Studios.. Coverart made by Jagged Design.

This was released on LP by Bootleg Booze Records.